AMRAP: “As Many Reps/Rounds as Possible,” that is, given a specific time period.

For Time (FT): Measuring the time it takes to complete a prescribed workout.

Score: The score denotes the total number of reps completed during a given workout.

Affiliate: An affiliate is a gym, or “box,” that’s officially affiliated with the CrossFit brand. 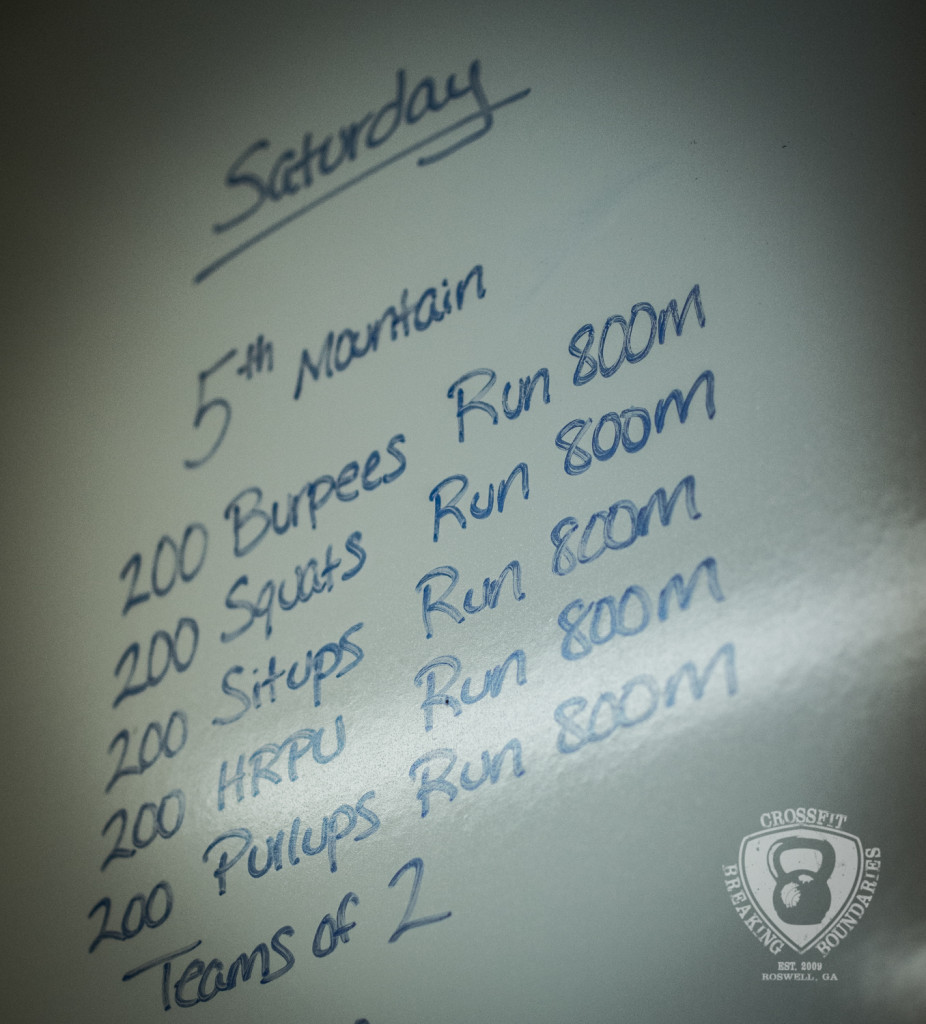 Burpees: Burpees make up a cornerstone of CrossFit workouts. Starting from standing, athletes bend down and plant their hands, kick back into a plank position, and perform a push-up. The legs are then brought back in, and the movement culminates with a slight jump up and hands clapped overhead. (The feet have to leave the ground for it to count!)

Double Under (DU): A double under is when a jump rope passes under an athlete’s feet twice with only one jump.

Bodyweight/Air Squat: Standing straight up, an athlete squats down until their hips are below their knees, then stands back up until the hips are once again fully extended.

Knees to Elbows: In this movement, athletes hang from a pull-up bar and then shoot their knees up toward the torso until the elbows and knees touch. For a harder version, try bringing the toes all the way to the bar.

Pistol: Also known as single leg squats, pistols require half the legs, but twice the effort.

Band-Assisted Pull-Up: CrossFitters who can’t quite get all the way up loop stretch bands over the bar and use them as a low-tech (and cheaper) alternative to assisted pull-ups.

Walking Lunge: Using bodyweight, a barbell on the shoulders, or a weight plate held directly overhead, athletes step forward with one foot and bend both legs until their back knee taps the ground.

Sumo Deadlift High Pull: In this movement, athletes take a wide stance over a barbell and explosively pull from the ground upward until the bar comes up to shoulder height.

Thruster: the thruster is— “simply”— a front squat straight into a push press.

Handstand Push-Up (HSPU): In most CrossFit workouts, athletes can kick up to a wall for stability while they perform this movement. Just remember these don’t count unless the head touches the ground at the bottom and arms are fully locked at the top.

Muscle Up (MU): Athletes hang from gymnastic rings and explosively pull their chest above the rings to the bottom of a dip position. From there they push up until the arms are fully locked.

GHD Sit-Up: Sitting face-up on a glute-ham developer (see GHD entry below), athletes reach back until their hands graze the ground, then explosively extend their legs and sit up.

Box Jump (BJ): No running starts allowed. Athletes jump up onto a box of a given height from a two-footed stance.

Snatch: The snatch is one of two Olympic lifts where athletes explosively lift a weighted barbell from ground to overhead in one movement, often squatting under the bar and then standing up— or “recovering”— to allow for heavier weights.

Clean & Jerk: The other Olympic lift, the clean & jerk actually encompasses two separate movements. Athletes start by explosively lifting a weighted barbell from the ground to the shoulders, often squatting under and then standing to recover. After a brief pause, athletes take a shallow dip and then drive upward to propel the bar overhead, often landing in a split position and then bringing their feet back in line.

Ring Dip: It’s just like a conventional bodyweight dip, only on gymnastic rings. The rings are unstable, making it harder to keep the hands close to the body.

Wallball: Holding a medicine ball, athletes squat down and explosively stand up, throwing the ball toward an eight- or 10-foot target above their heads.

WOD: The “Workout of the Day” is the workout CrossFitters perform on a given day. Many individuals and affiliates follow CrossFit.com’s WODs, though others do their own programming .

CrossFit Total: The total is CrossFit’s benchmark strength workout in which athletes have three attempts each to find their max back squat, standing press, and deadlift.

Hero WODs: Named after military servicemen, police, or firefighters who have died in the line of duty, these difficult workouts are intermittently programmed in CrossFit to provide an extra challenge and reminder of their sacrifice.

Metcon: Short for “metabolic conditioning,” metcons are designed to train stamina, endurance, and conditioning. Unlike WODs— which can also include purely strength or skill-based workouts— metcons generally include some sort of timed component performed at high intensity.

Murph: Workout (WOD) consists of a one-mile run followed by 100 pull-ups, 200 push-ups, and 300 bodyweight squats. Oh, and then another one-mile run.

Grace: Athletes must complete 30 clean & jerks at 135 pounds (95 for women) as fast as possible. Think of it like a sprint with a barbell.

Isabel: This one’s the same as Grace, only 30 snatches for time instead of clean & jerks.

GHD: The Glute Ham Developer is used for a variety of movements including glute-ham raises, GHD sit-ups, and back extensions.

C2 Rower: The rowing machine of choice for many CrossFit athletes.

Rings: Gymnastic rings used for a wide range of movements including dips, rows, muscle-ups, and just hangin’ around.

Abmat: A contoured foam wedge placed behind the back during sit-ups, the abmat allows for a greater range of motion while providing some padding against the hard ground.